The birth chart (called as Kundli in Sanskrit) of a person represents the collective conscience of self and people around at the time of ones birth. This is the reason that by looking at different houses of ones birth chart and assuming them as first house, we can find out almost everything about ones mother, father, siblings, spouse, kids and even friends and enemies. While creating a birth chart we keep that zodiac as the first house which is rising in the east when an event or a person is born.  We apply the same formula for even the birth of a nation. But then how do we create the birth chart of earth? It is by creating the chart of the time in question and keeping that house as the first house where aries zodiac is placed. So down below the first chart shows the status of the transit of planets in various zodiacs on 30th march 2020 at 18:00 hrs where zodiac 6 (Virgo) is appearing in the first house. However in the second figure, the chart has been rotated so that zodiac one i.e. Aries becomes the first house. This chart is called as Kaalpurush Kundli. 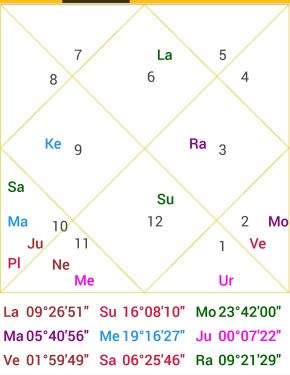 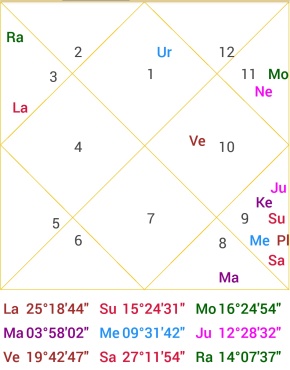 But then what’s the logic of keeping Aries in the first house and why do we call it Kaalpurush Kundli? Here it goes…I have already explained in the book THE ROOT CAUSE- AYRUVEDA, ASTROLOGY AND BEYOND FOR A BLISSFUL LIFE (links to procure captured below) and briefly in the previous blogs on Astrology that zodiacs represent weather conditions and planets represent Doshas expressing themselves differently in different conditions. So what would have been the condition of earth (or even Universe for that matter) when it just got formed- extremely hot and red. We all know that Universe came out of big bang which means expansion from an infinitely dense, hot and red point (as such everything in this world begins from a point). This condition represents the first zodiac of Mars i.e. Aries when due to heat of the temperature of Sun, the energy stored inside (due to previous zodiacs of Sagittarius, Capricorn, Aquarius and Pisces governed by Kapha and Vata) begins expanding outwards towards the peripherals. Thus the first house of Kaalpurush Kundli captures Aries zodiac thereby representing the expanding and hot energy when the world began its journey from a hot and dense point and hence the name where “Kaal” means time and “Purush” refers to the male energy which expanded to create Prakriti (the nature). Overall, the Kaalpurush Kundli represents the collective conscience of the world at any given time and it has a cause and effect relationship with the conscience of individuals/groups/societies/nation. In nutshell we can say that every act that we perform has an effect on the collective conscience of the world and vice versa.

Here is another way of looking at it. Since it is the position of the Moon in a specific nakshatra (constellation) which decides that a person is beginning ones life in which Dasha (planetary period), you would realize that Dasha of earth’s collective conscience keeps changing after every day as moon changes its nakshatra every day.  This indicates that the collective conscience of the world is ever changing and should essentially be taken into consideration while analysing ones individual chart. For example Saturn’s transition from 9th to 10th zodiac/house in Kaalpurush Kundli on 24th Jan 2020, triggered an event of Corona and associated events which will cascade into slowing down of economy etc. and  will have a huge impact on one’s birth chart thereby delivering lesser materialistic things even if apparently promised by ones chart.

*** So what’s the deep seated message in this? The message is that the world is ever and self evolving and its speed of evolution depends upon the karma of each and every individual and vice versa. From palmistry viewpoint, this is the reason that we find a difference in the lines/mounds of our left and right palm since while Karma hand (usually the right palm) represents that how we are moving basis the collective conscience (which in turn depends upon our Karma and of all the people in the world), the other hand denotes the exact destiny you were born with in this lifetime. And since Karma can go wrong in absence of Knowledge, we must start moving to higher knowledge instead of getting trapped in extreme materialistic desires by following the middle path. And the quicker we move up the ladder of evolution, the faster will this plane called earth evolve and vice versa.

From individual perspective, Kaalpurush kundli of a native determines the status of doshas, exactly of that point of time when that individual was conceived in the mother’s womb. This is the reason that first house of Kalpurush Kundli i.e. the house having Aries, represents one’s head (and the most dominating constitution/wiring of the brain and body) which will expand into a full fledged body. Second house i.e. Taurus represents head, third zodiac- arms, the nervous system (as Gemini depicts equal proportion of VPK) etc. and so on exactly in line with traits of different houses as depicted in a lagna chart. And since weather has a cause and effect relationship with planets and zodiacs, the first house of Kalpurush Kundli of a native, depicts the most dominating weather condition exactly at the time of conception which will decide the future course.

Thus, the chart of a native with mars in Aries (irrespective of wherever Aries is parked in lagna chart) would mean that native’s growth right from formation of fetus, would be high on Mars (lot of blood that too with good circulation). In other words, individual’s Kalpurush Kundli to the Prakriti (Basic constitution from Ayurvedic perspective) of the native and must be used for understanding the wiring of the body and brain and even psychology/conscience because of the cause and effect relationship with each other. This also means that time of conception matters much more than the time of birth, conveying the importance of preparing self and spouse at least six months before planning a child during which one must go for pure sattvic lifestyle with total abstinence from wrong foods and medicines else they are bound to affect the coming generation. Remember six months is just a figure. One may need much more time or may not need any depending upon the status of one’s health (mental as well as physical).

To sum up, Kaalpurush kundli and Birth chart both are important because both represent Muhurta (inauguration/beginning) of different events (conception and birth) even if those events are closely interrelated. In first case, the Aries becomes the first house and in second case the house that gets exposed first to the world outside the womb becomes the first house representing the most dominating aspect of psychology.

To understand Kaalpurush with example of an individual birth chart please check out this blog     https://therootcause.blog/2018/12/06/psorasis-understanding-the-disease-from-ayurveda-and-astrological-perspective-with-management-cure/

4 comments on “UNDERSTANDING THE DEEP SEATED MEANING OF KAALPURUSH KUNDLI”