By Alok Jain in Astrology, Ayurveda, Psychology and Ayurveda, Science and Spiritualism on July 19, 2018August 7, 2019
3 comments

Last blogs (part one and two of Ayurveda-the mother of Astrology) clarified that how planets and zodiacs are nothing but different levels of Ayurvedic doshas present in our body and mind and why at different times of the day, different months of the year and different locations of birth make us different from others due to the conditions we are born in. In this blog, we shall discuss a very interesting and extremely logical system of Mahadashas used in Astrology, which represent different levels of consciousness/awareness basis dominance of different Doshas (which is nothing but planets) at different points of time in everyone’s lifetime. Before you proceed, i strongly recommend you to go through the blog on how foods affect prana vata and put us into a vicious circle to have more of those foods and diseases ⇓

Here we go… So those advanced beings realized that, the conscience of all the people on earth (which is nothing but change in levels of prana vata i.e. vata of the brain) keeps changing with time in a set pattern covering doshas associated with all the nine planets. To comprehend this aspect, let us understand that in its journey of evolution, every soul (which is comprising of our conscience only) goes through a cycle of 120 years constituting various periods assigned to different types of conscience (or planets). These periods for different planets (or say Doshas) were called as Mahadashas, which kept changing after a specific duration.

And here is the logic to understand how they work:-.

Let  us visualize a person who is passing through conditions, which are pitta conducive. So pitta conditions will increase agni of the person. Since it is Sun that increases pitta (or say pungency) this period of high pitta is referred to as Sun’s Period (called as Sun Mahadasha in Vedic terminology). A person passing through this time will exhibit high sadhak pitta (i.e. pitta of the brain) characterstics vis a vis his/her other periods like intelligence, ego, analysis, pitta diseases etc. In terms of taste it will represent pungency.

However there will come a time when continuously high agni of the brain (meaning tirelessly working brain) will burn down all the tissues in the body too including blood. As fluids and tissues of the body will burn down, volume of blood will also reduce and thus less of it will reach the brain meaning high vata towards the brain. This vata will begin blocking pitta of the brain. The result will be that tired and cooler brain would reduce mental as well as physical activity and the person will begin to gain kapha in the form of fluids in the body and mind as coolness brings kapha. Since moon represents kapha, especially fluids, this period is called as Moon Mahadasha. Since prana vata increases during moons period, it leads to relatively more consumption of salty, sour, sweet tastes to slowly and gradually increase blood volume in the body so that more of it reaches the brain to get a kick. Read this blog ⇓ to understand why more about how high prana vata pushes one to eat more of such tastes.

Thus reduction in vata due to partial restoration of blood to brain once gain ignites sadhak pitta (i.e. pitta of the brain) which had started getting blocked due to high vata towards the brain.  This re-excites the person however it has to be noted that by this time sourness consumed during moon’s period, have started narrowing the blood vessels and excess of salt and sweetness which are increasing volume of the blood to make it reach again towards brain will again increase pitta plus thickening of blood and further narrow the blood vessels. Once blood vessels get narrower, they will increase the speed of blood moving in the vessels. This would mean that blood will more quickly cross every part of the body which would mean less nutrition to the cell. This would increase vata and pitta both and thus excitement of mind and body. Thus, it has to be realized that during mars period, even if sadhak pitta and prana vata both will be higher and less subtle vis a vis one during Sun’s period leading to a higher VP mind. Thus a relatively higher VP mind due to more excitement would be mentally and physically more active and depending on the level of VP in mind (which would depend upon overall planets placement) would have more desires and urge to have more of sour, salty, bitter, pungent, sweet (especially sugary) foods taking him/her into a vicious circle.

This surge in energy will throw the person in the force of inertia leading to a racing mind high on vata and pitta. Thus this period is assigned to Rahu (and is called as Rahu Mahadasha) when vata and pitta are so high that the person is in a super-excited stage In terms of tastes it is extremely pungent/sour/salty/bitter because sourness narrows the blood vessels and increases blood circulation thereby increasing pitta. However with passage of time, blood volume reduces meaning less of blood getting supplied to body and that to through narrowed vessels leading to high vata. A super-excited stage would mean that the person will do all that a high vata and pitta i.e. rajasic mind is likely to do. Materialism, interest in electronics, maybe addiction towards those items which give temporary relaxation to a highly excited mind etc. etc.  So what shall this Rahu period do in the long run? A super-excited stage of mind may bring fame and materialistic gains, however since such minds are racing too fast, they miss the subtle changes happening in and around them thus denting their spiritual aspects like mental and physical health, relationships, financial matters (by the way its easy to appreciate that the collective conscience of the world is passing through Rahu Mahadasha).

All these dents shake the person bringing down his energy levels especially of his/her racing mind. This is where the period or mahadasha of Jupiter enters when pitta in mind and body begins to settle down thereby pushing kapha and settling the mind. However by this time, sourness has not gone down and therefore Jupiter gives bulk (not muscular but fatty since sourness expands the cells in our body). Also it has to be appreciated that now kapha is depositing over an already vata body. In terms of taste, it is sour/cold/salty/sweet. All in all, it is Jupiter that makes one realize the mistakes that he/she made in life and therefore Jupiter is called as Guru in Sanskrit, meaning a teacher. Thus, time is the biggest teacher.

Since pitta has reduced, sourness also goes down leading to astringency settling in marking the beginning of Saturn period or mahadasha. Once the conscience awakens fully during the Jupiter phase, the person subconsciously decides to stick to the teachings of life and thus remains in an introspective mode, thereby making corrections in his/her life and staying in a cocoon. As such by now, high pungency and bitterness (during Mars and Rahu phase) has  already created high vata in the body and mind and therefore people reaching this period of Saturn have to stick to a disciplined life in order to remain healthy (as much as possible) since vata people are highly prone to diseases. This is also the reason that Saturn is said to possess Vakra (haywire) drishti because vata always travels haywire.  While Jupiter’s kapha was due to sourness and slightly reduced pitta, Saturn loses that kapha due to sourness as astringency has set in and therefore Saturn people are usually quiet people.

Post Saturn’s phase, the person learns how to lead the life and thus their intellect wakes up which means buddhi in Sanskrit/hindi. Coldness of Saturn increases kapha but this time kapha deposits on existing vata only. Pitta also begins to rise a little thus VPK all are in same proportion. This period is assigned to Budh or Mercury.

And now the comes the time, when kapha is further on the rise over existing vata and even pitta has increased a little. While vata here is giving intelligence, increasing kapha gives a thicker CD of the brain, which along with increasing pitta makes a person high on absorbing and analyzing gathered information and less on communicating it out. This is the period of Ketu.

And finally comes Venus when astringency begins to fade away and sourness begins to rise thereby increasing pitta. This phase of Venus expands our consciousness to properly enjoy the life from whatever the person has learnt during the previous phases of life. Post Venus, again, the sun takes over and this cycle goes on.

of conscience only. Astrology identified that this cycle of conscience gets completed in every person in 120 years. It also realized that each phase lasts for a specific period i.e. Sun’s phase lasts for 6 yrs, Moon for 10, Mars for 7, Rahu 18, Jupiter 16, Saturn 19, Mercury 17, Ketu is given 7 yrs and Venus has been given 20 yrs. 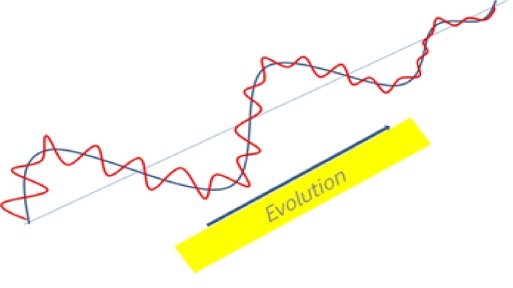 Mahadasha into Antardasha and so on. And as soul proceeds in time, from one life to another, the height/depth of these crests and troughs is bound to get lesser both in Mahadasha and smaller dashas making herself more evolved. Isn’t that exactly the way we learn to drive our vehicles making big mistakes (and maneuvers) initially and then lesser and lesser towards perfection?

In the next blog, we shall discuss that how simply we can employ Ayurvedic principles to read the birth chart of a person or an event.