DIABETES!!- UNDERSTANDING THE CAUSE AND CURE FROM AYURVEDIC PERSPECTIVE 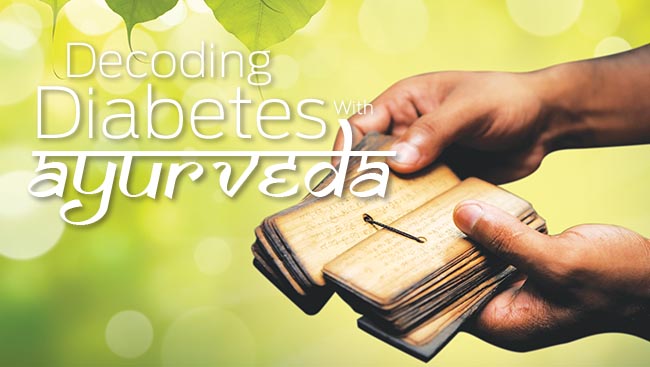 Despite exponential progress in the last few decades, Modern medical science is yet to find cure for most of the chronic diseases like Hypertension, heart and brain diseases and Diabetes. The fact that people with these diseases have to take allopathic medicines forever, speaks clearly that all the medicines developed so far for these diseases, are only able to manage the symptoms instead of curing them. The result is that there comes a time when the imbalances, which had been masked by these medicines (and also due to imbalances created by the medicines themselves), surface up with serious implications, further taking the patient deeper into a whirlpool of more medicines and severe discomfort. It is therefore important that we must hit the root cause in case we wish to cure any disease. This blog will explain you that how you can cure diabetes using simple principles of Ayurveda.

*** Please note that this post is an extract of the book – THE ROOT CAUSE. To understand this blog in totality, it is essential to understand the basic concepts of Ayurveda. So click here to watch youtube videos and pick up a copy of THE ROOT CAUSE  book (links mentioned at the end of this post ⇓⇓⇓ )

Here we go….Modern science has already categorized Diabetes in two types. Type One where the body is not able to make enough (or no) insulin (the hormone required by body cells to breakdown glucose into energy). And Type Two where the body is not able to metabolize the insulin produced. In either cases, the sufferer feels tired and hungry all the time because her/his cells are not able to produce energy out of glucose. The result is that the blood remains flooded with excess of un-utilized glucose leading to serious health issues like neuropathy and decaying of body parts like kidneys, eyes etc. (read symptoms of Diabetes). So, let’s pick up these two types one by one (though within each category too, Ayurveda basis different doshic imbalances further divides Diabetes into various types).

Insulin is produced by pancreas and when pancreas goes unwell (which happens when enough blood does not reach the pancreas), its production declines. Since paucity of blood means Vata in Ayurvedic terms, Ayurveda calls Type One diabetes as a vata disease. Now such an issue arises where not just the pancreas but even the mind is vata ridden which is seen in a typical vata personality and is usually a congenital trait,

High vata is most difficult to be treated and in case such people want to be cured they have to live on a thin line forever in their life. So such cases would need to work in steps to know what suits them best.

Step one:- Their first aim should be to firmly stick to diet as per vata pyramid i.e. less of foods which are pungent, astringent and bitter e.g. chillies, tea, coffee, liquor, tobacco, chocolates, onion, garlic which are very high on these tastes and more of those foods which are sweet (having protein, fats and carbs), salty and sour.

*** strongly recommend to go through blog one and two on food pyramid for different constitutions for deeper clarity on this concept.

They should have those foods which are easy to digest like brown bread instead of chapatis, diluted curd, warm spices, well mashed and cooked lentils and beans else in absence of pungent foods (which they cant have much to avoid burning their already less blood and thin body), difficult to digest foods will generate toxins in the body and further increase vata.  As such very high pungency will further increase their prana vata i.e. hyperactivity in mind.

Step two if one doesnt  suffice:- If this doesn’t work for them, they may need to consume fruits like bael or aloe vera (being sweet, bitter, astringent and slightly pungent) in morning to pacify vata of their pancreas and in night to pacify vata of their brain. This step becomes important in those cases where due to high prana vata, lower body has accumulated too much of sourness, pungency and toxins leading to high vata towards pancreas. Such people will be hyperactive minds with usually plump body (swollen due to sourness). However they should abstain for tea, coffee and other foods  as mentioned above which are combination of high pungency, astringency and bitterness and also remain stuck to easy to digest foods.

***Its only in extreme cases where vata of pancreas is too high, they may need to depend on insulin.

Contrary to Type One diabetes, Type two diabetes is a kapha disease where the body due to a kapha mind (relatively less active mind), accumulates so much of tissues due to slow metabolism, that this leads to incomplete/improper breakdown of food stored thereby leading to accumulation of toxins and poor circulation of blood (as too much of kapha leads to poor agni). The result is that environment around cells becomes so congested that insulin released by pancreas is not able to penetrate the walls of the cells for breaking down glucose.

A person with this disease where insulin production is not a challenge should simply stick to Kapha pacifying diet, which is exactly opposite to vata pyramid i.e.  less of sweet (meaning low GI foods), salty and sour foods and more of astringent, pungent and bitter foods like green tea, tea, coffee however they should be careful that they dont overdo on such foods meaning treat them as medicine only and consume them only till to cure their disease and never continue them for too long (click the link mentioned in para above for blog two on food pyramids for kapha people). To rev up their metabolism they should resort to intense exercises (please remember that exercising alone won’t help and it has to be complemented with right diet as mentioned above). Yes, kapha minds are likely to be lazier than their vata counterparts, and they have to learn to shed away their laziness in order to stay healthy.

What if someone is having a weak pancreas but a kapha mind? This could be inborn trait or acquired due to wrong eating habits like having too much of bitter, astringent and pungent foods e.g. green tea which inflames lower body parts including pancreas leading to poor production of insulin though in such cases the person is likely to become high on vata in mind as well as pancreas including entire lower body as discussed in type one diabetes.

*** This will be a shock and surprise to many but the fact is that green tea’s unscrupulous consumption due to fad and status symbol associated with it, is one of the major reason for sudden surge in this disease. I personally know several cases of people gulping loads of green tea with the aim to stay fit and/or reduce their weight falling prey to serious issues of insomnia, chronic stress, poor heart health and severe diabetes, who got immediate and significant relief in their issues after quitting this drink. In fact, contrary to the famous convention the fact is that milk tea is far better than green tea as milk’s sweetness doesn’t let the pungency of tea harm the pancreas to that an extent. However a person with poor insulin production should totally refrain from all sorts of tea, coffee etc. and its a misconception that tea without sugar is fine, because its not the sugar but the other three tastes in tea that are harming the pancreas.

Again bael fruit if taken in morning will help to pacify vata of pancreas. It is easy to cure such people since bael in morning will not increase vata of the mind and thus will not push more inflammation.

WHY DELAYED APPROACH TO AYURVEDA MAKES IT DIFFICULT TO CURE IT

A vata mind is bound to get attracted towards bitter foods as these foods give temporary relief to the stressed out mind (due to vata). However due to vasodilation effect (of bitter foods), vata goes further high leading to more craving of such foods (watch this video to understand how bitter foods cause addiction). As vata increases in the brain, it further increases vata and pitta of the entire body including pancreas (as such tea coffee are pungent too causing further inflammation). Thus with passage of time, a vata person becomes very high on vata (means paucity of blood). Thus when he/she approaches, ayurveda at a very stage, efforts to repair pancreas with the help of sweet, astringent and bitter herbs/foods like bael, would further reduce blood from the upper and peripheral body parts thereby causing loss of sleep/headache/bodyaches.

EARLIER YOU APPROACH AYURVEDA THE BETTER IT IS

Thus, it goes without saying that earlier you understand your ayurvedic constitution and eat in line with the teachings of Ayurveda, higher are your chances of getting cured completely. However this is for sure that Ayurveda will give you respite even if you switch over to right eating at a later stage in life (in form of either totally controlling your diabetes with same dosage of allopathic medicines or lesser). And this goes true  for all diseases.

DEAR READER, THIS BLOG IS AN EXCERPT FROM THE BOOK “THE ROOT CAUSE”. YOU ARE MOST WELCOME TO USE THE CONTENTS OF THE BLOGS OR “THE ROOT CAUSE” BOOK AS KNOWLEDGE SHOULD NEVER BE PATENTED, HOWEVER I WOULD REQUEST YOU TO MENTION THE SOURCE OF THE CONTENT WHENEVER YOU SHARE. THIS WILL HELP TO PROMOTE THE ENTIRE WORK WITH THE ONLY AIM TO BRIDGE GAP BETWEEN CONTEMPORARY KNOWLEDGE AND THE VEDIC SCIENCES. THANKS IN ANTICIPATION 🙂

TO UNDERSTAND DETAILED CONCEPTS OF AYURVEDA AND OTHER VEDIC SCIENCES including ASTROLOGY, YOGA, MEDITATION, ASHTANG YOGA AND WORKING OF THE HIGHER WORLD, PLEASE PICK UP A COPY OF THE ROOT CAUSE BOOK from the links given below ⇓ ⇓ ⇓ ⇓ ⇓