VASTU AND ITS CONNECTION WITH AYURVEDA, ASTROLOGY AND OTHER DISCIPLINES INCLUDING SPACE-TIME FABRIC..

Most of the Vastu enthusiasts would know that one of the principles/fundamentals that this amazing science of architecture of Vedic era uses, is that of aligning magnetic field of earth with the bio-magnetic field produced by occupants in the building for maximizing human potential (since non/poor alignment can disrupt bio-electricity flow in the nervous system leading to health issues at a very subtle level). This blog will explain you that this science employs the fundamentals/concepts of many other sciences like Ayurveda, Astrology and even the effect of mass on space time fabric (which was postulated by Einstein around 100 years back and got confirmed recently after detection of gravitational waves). Let us begin…

USE OF SPACE-TIME FABRIC IN VASTU

that’s how Sun’s mass has created a dent in the space time fabric thereby creating a funnel shaped structure where earth is trapped and thus revolving around it due to the speed/momentum it gained when it  got formed at the time of big bang. Exactly the same goes for bigger objects like sun itself which is revolving around the center of the milky way galaxy because of the dent created by the huge black hole at the center of the galaxy. And same is the story with moon which is revolving around earth due to the dent created by latter. This means that everything, irrespective of its size does create a dent in the space time fabric including a beam which juts out of the flat roof. So when you sit or sleep under a beam, the dent created by it’s mass

exerts more pressure on your aura (the subtle part of your body and mind). It is this reason that Vastu always suggests that one should not sleep under such structures because they will distort your aura and create health issues, mental as well as physical (and aura is nothing but the magnetic flux made by your body due to electricity running in it).

ROLE OF AYURVEDIC PRINCIPLES IN VASTU

Most of us would have experienced that when we are surrounded by cluttered environment (disorganized), it creates confusion and sometimes even irate behavior. This is because haywire surroundings create confusion and thus haywire movement of current in the mind too which is nothing but vata and as vata goes too high in the mind, it brings Rajasikta (a state of mind associated with uneasiness, excitement, inertia) and it is a known fact that as Rajasikta increases, diseases too rise (for detailed understanding of rajasic mind and it characteristic please watch this video)…..Higher the chaos outside, higher would be vata, higher would be Rajasikta and more would be the diseases associated with rajasic mind. It is this reason that Vastu always teaches us to keep our house in order and dispose/throw away unwanted things as they will clutter the space and invite diseases. In fact the reverse is also true. That is, when vata goes too high in one’s brain because of wrong foods etc, then vata (haywire/disorganized approach) of the environment around too goes high, taking us into a vicious circle. Ancient texts called this philosophy as “YAT PINDE TAT BRAHMANDE” meaning ” All that is outside you, lies within and vice versa”. And this concept is used even in Astrology. (Read this blog to understand how Astrology uses this philosophy and other fundamentals of Ayurveda…).

This philosophy is applicable in all aspects of Vastu, for example:-

ROLE OF ASTROLOGICAL CONCEPTS IN VASTU

Astrology uses colors to invoke energies of different planets e.g. red color generates energy, passion and increased flow of blood and that is how this color is used for invoking Sun and/or Mars through various gems. Same ways white color (through pearl) invokes calmness signified by Moon. Exactly this concept gets used in Vastu as well while placing articles/painting the walls of different rooms/places in a house/building. So, yellow (in fact more towards saffron) is ideal for study room as it calms down the mind and invokes Jupiter (the planet of wisdom) and helps the student to absorb more knowledge. Likewise, bedroom of married couple can be painted red to generate passion but those of unmarried should have more of white tone to keep their mind calm and composed.

*** Please remember that this is a thumb rule to explain you the science of how color affects one’s energy and its implementation on ground will vary from person to person depending upon his/her level of different energies. For example a person already high on Mars energy should not encounter more of red color else it will further increase mars energy to destructive levels (this is the principle used in Astrology too while recommending stones).

We all know that areas closer to equator are warmer and more humid than farther ones and therefore if we move from north pole down south towards equator (for northern hemisphere), the increase in ambient temperature would lead to increase in peripheral blood circulation leading to increase in Mars energy thereby increasing passion and physical strength (the way it increases during the month of Mar-April (Aries) and Oct-Nov (Scorpio). This concept of directions bringing change in different types of energies is used in Vastu too, apart from Astrology where Ayurvedic doshas bring change in mind and body of people due to change in direction. Figure below along with reasons, is self-explanatory..

However since earth’s axis is tilted, the wise ones realized that the directions mentioned in the figure above will affect any point on earth by superimposing the tilted figure of earth as captured below ⇓⇓⇓⇓⇓ which is called as VASTU PURUSH… 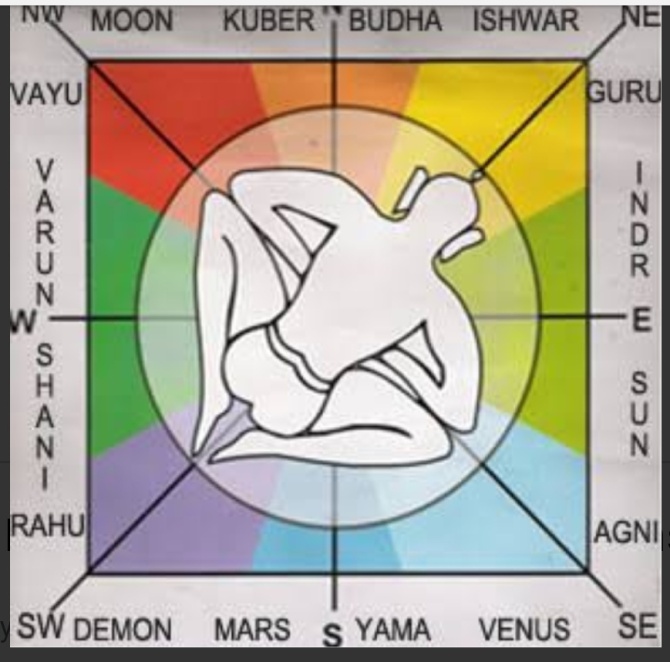 *** Direction of the flow of air also plays a very important role in deciding the direction of main door in a building. Since cold air in northern hemisphere flows from north pole to the equator, direction of main door is kept towards North or east (as rotation of earth on its axis shifts air flows towards east in Northern hemisphere), so that building gets ventilated. However windows should essentially be there in all the walls to facilitate cross ventilation with relatively smaller windows in the south wall to avoid air moving straight from north to south without ventilating other places. Goes without saying that following this science in totality becomes difficult (mostly impossible) in multi-storied apartments.

2 comments on “VASTU AND ITS CONNECTION WITH AYURVEDA, ASTROLOGY AND OTHER DISCIPLINES INCLUDING SPACE-TIME FABRIC..” 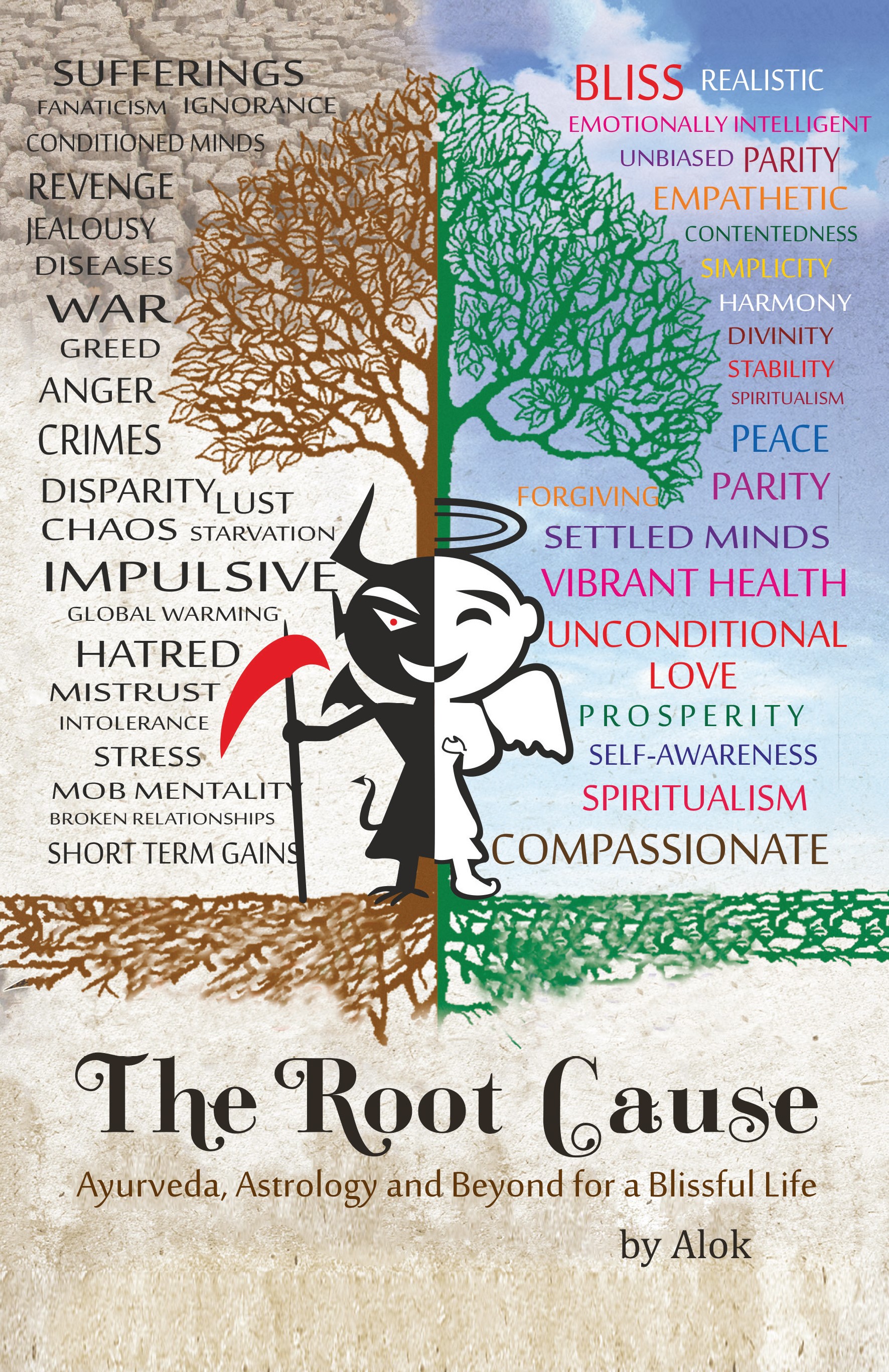