Previous blogs of Astrology Decoded series (click>>> Part I, Part II and Part III of this series) have already explained that how planets are combinations of various ayurvedic doshas, zodiacs are nothing but conditions and Dashas are different periods in a set 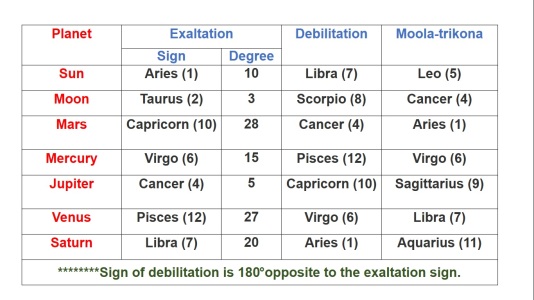 pattern denoting dominance of a specific planet (which means dosha only) that every soul faces to further evolve.

In this blog we shall understand the science that will explain that what makes a planet exult or debilitate in different zodiacs, what is the significance of degrees and what is the logic behind Mooltrikona sign.

From the previous blogs you would have realized that Saturn is an astringent and cold planet and Saturn like conditions get created during the Zodiac Capricorn and Aquarius which fall roughly in the period starting mid-December till mid-Feb, when the atmosphere is extremely chilling. And this is the reason that Saturn is said to govern these two zodiacs. However, Aquarius conditions are more astringent in nature (due to continued cold and astringency after the spell of Capricorn) vis a vis Capricorn and that’s why out of two zodiacs, Saturn expresses itself as per its nature more during Aquarius zodiac and that’s why it is called as Mooltrikona sign for Saturn. Exactly on similar lines, all other planets (except Sun and Moon which have been assigned only one zodiac each) have one mooltrikona sign (or zodiac) out of the two zodiacs they own as shown in the table above whose conditions are more similar to the nature of the planet itself.

Now Astrologers have been reading that Saturn gets exulted in sign Libra. So what’s the logic behind it? Here it goes…from the previous episodes we know that Libra sign represents conditions similar to that of Venus which is sweetness, slight sourness and warmth. So what shall happen if Saturn would fall in this sign? Saturn’s astringency and coldness will get neutralized with Libra’s slight sourness and warmth (respectively) thus removing the extreme qualities of the planet as well as the zodiac (this is because astringency constricts whereas sourness expands acting opposite to each other thereby bringing the volume of the tissues of the body to a healthy state). Thus Saturn in libra sign would produce results which would not be on extreme thereby exulting itself or producing good effects. In fact, exactly this is the logic basis which sour foods moderate on pungency and high on sweetness are recommended for a vata person (refer to blog on food pyramid for Vata personality).

On the other hand Saturn debilitates in Aries Sign. This is because Aries sign represents Mars type conditions, which are high on energy resulting in good peripheral blood circulation and muscular growth, resulting in poor circulation in the core. And since Saturn means Vata meaning relatively less blood (in core), mars conditions further reduce the blood in the core thereby leading to excess vata (excess paucity of blood). Thus even a bit of pitta on this high vata area is bound to burn the tissues leading to failure of the organ corresponding to house where Saturn is sitting. This is because high vata means thin wire and when high pitta i.e. current would pass through it, it is bound to burn and get damaged.

***** To understand the tastes of planets, i urge you to know how different tastes work through Video ONE and TWO. For detailed understanding, you may pick up a copy of the book THE ROOT CAUSE.

So while we know that planets exult or debilitate in different signs, it is not that a planet would exhibit this quality throughout the duration of a specific zodiac but this exultation/debilitation happens more towards specific points (or degrees) on the zodiac. To know that why degrees matter and how different planets exult/debilitate on specific degrees in different zodiacs, let us understand a few facts:-

Thus when the time duration of libra zodiac begins, the conditions which are at 20 degrees in libra (meaning roughly 20 days after the beginning of libra) are most suitable for Saturn to exult it.

Different zodiacs have been assigned different doshas. So if we go as per their roll nos with Aries as first zodiac then zodiac no 1, 5, 9 are considered as fire (pitta) signs; 2, 6, 10 as earth (kapha) signs; 3,7 11 as air (vata) signs and 4,8, 12 as water signs. Now if we go strictly as per lords/owners of different zodiacs, this categorization of zodiacs basis doshas apparently seems wrong e.g. if saturn owns 10 and 11 zodiacs then both should be vata signs but as per categorization, 10 is earthy sign. So, here is the logic. It is Mooltrikone sign whose characterstics are close to the planet it represents and since Saturn’s MT sign is 11, it is a vata zodiac. Whereas since zodiac 10 is immediately after Jupiter’s zodiac (sagittarius), it still possesses qualities of earth though due to coldness in this zodiacs month, zodiac 9’s pitta (focus represented by bow and arrow as symbol of sagittarius) qualities are lost by this time. Lets take another example. Out of the two zodiacs owned by mercury, no 6 is earthy and 3 is airy. This is because 6th zodiac falls after moon’s 4th zodiac (during july) which leads to increased kapha whereas 3rd zodiac is when due to excess heat of 1st and 2nd zodiac, kapha has melted leading to increased vata.

In the next blog we shall discuss about the real science behind astrological remedies and how due to absence of understanding of this science, the practices got misunderstood with passage of time.